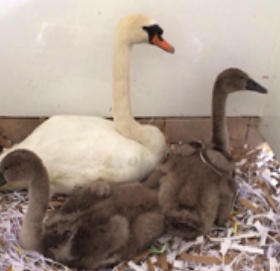 Repair of injuries sustained during dog and fox attacks, repair of damaged legs and feet, removal of fishing tackle embedded internally and gunshot injuries are usually performed by a veterinarian.

Following surgery, the swan will be treated with antibiotic cover, a saline drip if necessary, food supplements, pain relief and bandage replacement at our treatment centre. 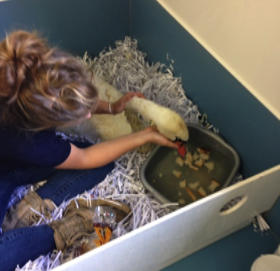 Botulism can kill a healthy swan in a matter of hours so it is vital that treatment starts immediately.

Avian botulism is a paralytic disease caused by ingestion of a toxin produced by the bacterium Clostridium botulinum. It acts by blocking nerve function and leads to respiratory and musculoskeletal paralysis.

This bacteria is widespread in soil and requires warm temperatures, a protein source and an anaerobic (no oxygen) environment in order to become active and produce the fatal toxin. Decomposing vegetation and invertebrates (i.e., insects) combined with warm temperatures can provide ideal conditions for the botulism bacteria to activate and produce toxin.

Birds either ingest the toxin directly or may eat invertebrates (e.g. chironomids, fly larvae) containing the toxin. A cycle develops in a botulism outbreak when fly larvae (maggots) feed on animal carcasses and ingest toxin.

It is very important that foodstuffs containing meat are not discarded in waterways. Ham sandwiches, discarded chicken bones and the remains of barbecues are lethal for swans.

The treatment for botulism requires a considerable amount of time and effort to reverse the effects. Botulism causes progressive weakness and paralysis which normally effects the action of swallowing, also causing them to be unable to hold their head up. Depending on the severity, we may have to syringe feed critical care solution and give affected swans soluble charcoal to absorb the toxins with a possible IV Drip for hydration.

Normally, if a swan survives the first 48-hours, their chances of recovery are much better. We sometimes give them a Vitamin B12 Injection, which can encourage them to feed. The process is very slow but each day symptoms can gradually improve. After approximately one week, they become more alert and show an interest in eating and drinking. If they survive to 3-4 weeks, they will definitely be over the worst and from our experience they will become unhappy to be in intensive care at which point, we transfer them outside and into one of our rehabilitation ponds. This photograph shows the intensive treatment used in cases of botulism. 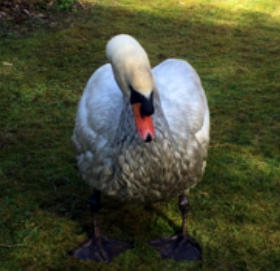 Occasionally, oil enters waterways accidentally. Oiled swans must be cleaned as soon as possible because if the swan tries to clean itself and ingests the oil it will poison them and it can be fatal. The oil also causes swans to lose their waterproofing on feathers, which can cause difficulty being on water.

The treatment for oil normally involves washing the swan several times in Fairy washing-up liquid as it seems to be most effective. If the oil leak is severe and the possibility of the swan has ingested the oil, we can give charcoal to help reverse the effects. This photograph shows a severely oiled swan.

Poisons and toxins such as blue green algae, prevalent in lakes and canals during the summer months is treated in much the same way as botulism although the effect on a swan is not so critical. This photograph shows a pen and her two cygnets rescued from a lake with suspected ingestion of toxins.

Swans commonly ingest foreign bodies like fishing weights that can eventually cause lead poisoning. Although swans can tolerate high levels of lead without showing an obvious health sign, it does lead to serious effects. The most common symptom is a kink in a swan's neck followed by respiratory problems, becoming lethargic and weight loss.

Lead poisoning can be very difficult to determine, however x-rays can show foreign bodies in the gizzard and blood tests can show the level of lead. The treatment depends on the severity but normally involves giving them EDTA and the vitamin B12 to encourage appetite.

Lead weights, used by anglers, were banned from use in the UK during the 1980s due to a campaign started by Swan Lifeline. Unfortunately lead weights are now easy to import from abroad where there are no restrictions so sadly we are seeing more swans with the symptoms of lead poisoning.

Every year, we receive a vast amount of telephone calls relating to fishing tackle. Whether the hook is caught in a swan's beak, swallowed or just wrapped in-line. Depending on the situation, we try to de-tackle the birds on location. However, sometimes we require veterinary assistance. The objective is always to release back to the wild as soon as it is safe to do so. Many anglers in the local community are hugely supportive towards wildlife along the river, however we urge all anglers to be responsible and try to discard their fishing line and hooks appropriately to discourage these incidents occurring.

The following photograph (left) shows a hook injury to a swan. The photo on the right is Pink Feathering (see next section). 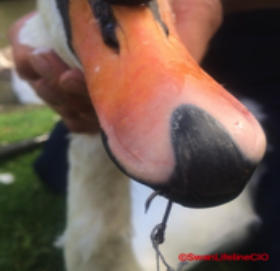 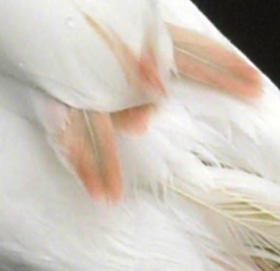 Pink feathering is most likely caused by bacteria in the water although the source is not known. In severe cases of pink feathering, the swan will lose buoyancy as the feathers lose their natural waterproofing. With the help of researchers in the USA, it was discovered that the best treatment for this condition is bathing the swan with washing-up liquid. 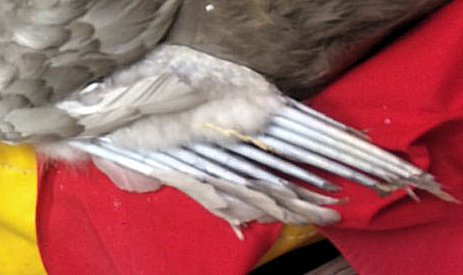 Young cygnets suffer from this condition, which causes developing flight feathers to grow at an angle away from the body.

If this condition is not dealt with at an early stage, the cygnet will never be able to fly as the mature flight feathers will be deformed. The treatment for this involves splinting and bandaging the feathers against the body to help them lie straight. The bandages are changed every day for 7-10 days while the feathers grow. The results from this treatment are often excellent and the cygnet will be able to fly normally.

This photograph shows 'angel wing' in a cygnet.