The mute swan is the largest and heaviest water bird in the British Isles. 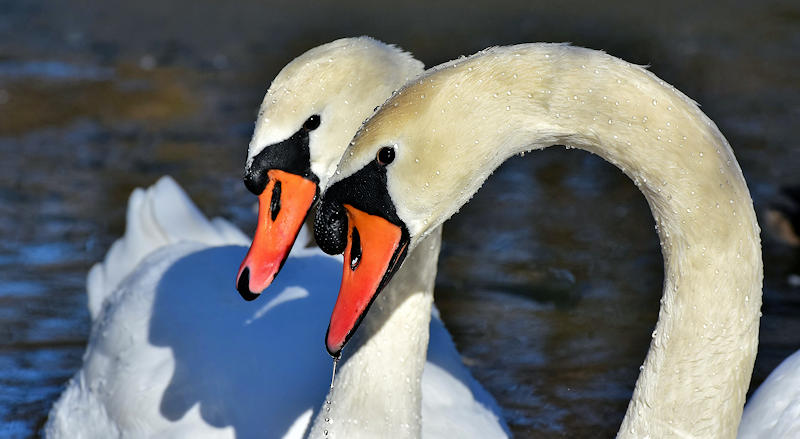 The male is known as the cob (right) and the female as the pen (left). They appear identical but the male is larger, with a slightly longer head and body and wider wing span. The male has a larger caruncle (knob or berry) at the base of the bill. In their natural habitat they can live for 20 years or more.

Although designated as Mute they do make hissing and honking sounds but significantly do not make any noise in flight. The only sound is the beating of the wings.

Groups of immature swans and some older birds seeking a new mate or those too old to breed, often congregate in non-breeding flocks, the best known on the Thames are at Walton, Staines, Windsor and Reading. Birds in these flocks tend not to be in a very good condition as they are often fed inappropriately and do not benefit from the natural weed which is their mainstay in the wild.

Pair bonding takes place from the age of two although swans are not generally mature until three years old and may breed at this age if there is a territory available. The size of the territory may be determined by the amount of natural food. In areas where the supply of common duckweed or similar is plentiful pairs may breed in fairly close proximity. Territorial disputes can involve fights to the death – usually by drowning. A pair of swans will generally remain in the same area for life using the same nest site. Provided both swans remain healthy they will usually stay together. Whilst unlikely to pine to death at the loss of a mate swans will generally go through a period of mourning. There are, however, instances of swans changing partners, usually where a stronger cob takes over.

Swans breed in the Spring, laying an egg every other day and only commencing brooding after the clutch is complete. The female has a brood patch and will incubate the eggs for 35-42 days turning the eggs with her bill. The male will keep the eggs warm and protect the nest whilst the female leaves the nest to feed and preen. The whole clutch of eggs generally hatches within a 24 hour period, the cygnets remain on the nest for a further 24 hours and then take to the water. The parents pull up weed and stir up sediment from the river bed for the cygnets.

The male has no brood patch and despite reports in journals are rarely able to incubate the eggs unless the cygnets are almost ready to hatch. If for some reason the eggs are abandoned it is against the law to take the eggs and incubate them artificially. The eggs must be destroyed.

Cygnets are grey when they hatch with black beaks and gradually turn brown over the first six months at which time they learn to fly. By one year old they are predominantly white but the beak remains grey/pink. Full white plumage and orange beak come with maturity. Immature and non-breeding swans moult first. Breeding females moult next and when the female is fully flighted again the male then moults ensuring that one parent is able to defend the cygnets if necessary. Swans at rest will often tuck one foot up on their back, possibly to dry – this can give rise to speculation that they have an injury.

Once the parents have taught the cygnets to fly they will often fly with them to a local area where non-breeding birds gather. At times the cygnets are reluctant to leave and eventually the parents may turn on them – as they prepare for the next breeding season.

The mute swan is generally believed to have been brought to this country from Turkey by Richard The Lionheart. Wealthy Guilds and landowners kept swans in flocks for the table. The only remaining private flock of swans is at Abbotsbury in Dorset the swans here nest in very close proximity to each other. It is not known whether this is due to familial reasons or a genetic mutation. Needless to say they are no longer eaten. Ownership of swans on the River Thames is still held by the Crown, The Worshipful Company of Dyers and The Worshipful Company of Vintners – the annual ceremony of Swan Upping is the traditional time for marking new cygnets. The marking of the beaks has been discontinued and the livery companies now fit a metal ring to the leg. The Queen’s swans have no additional ring. BTO rings make for easy identification and help with record keeping as do white plastic (darvic) rings when fitted.

Swans, their nests and eggs are protected by law and it is illegal to interfere with them in any way. They may only be removed or handled by recognised groups who should act in the best interest of a sick or injured bird.